A lesson in forest rehabilitation index

A lesson in forest rehabilitation

If you had arrived on the small island of D’Arros in the Seychelles two centuries ago, you would have landed on bright white beaches fringed with coconut palms and casuarina trees. In the interior you would have found patches of broad-leaf forest interspersed with scrub vegetation. Extensive deposits of ancient guano would have indicated that the island supported very large populations of nesting and roosting seabirds. It was also home to healthy numbers of giant tortoises, land crabs and indigenous birds.

All endeavours at the centre are in line with its mission statement, which is ‘To preserve and showcase the ecological integrity of D’Arros Island and St Joseph Atoll through research, monitoring, restoration and education’.
In its time the DRC has implemented no fewer than 36 research projects, which have focused on endangered marine species such as sharks, manta rays and turtles, as well as their habitats. Long-term programmes have been put in place to monitor nesting turtle numbers, coral reef health and climate change. Recently, under the expert guidance of the SOSF, the DRC has conceived additional targeted research projects and initiated an exciting environmental education programme.

But it’s not just about the ocean and its inhabitants. The marine and terrestrial environments are closely connected and the SOSF–DRC views them as equally important components of the D’Arros Island and St Joseph Atoll ecological unit. Native tree forests provide a home for abundant seabird populations, which contribute valuable nutrients to the terrestrial environment. These nutrients eventually run off into the ocean, where they stimulate plankton growth and provide food for animals higher up the marine food chain, such as manta rays.

Cover image
Giant tortoises are important agents of seed dispersal for many species of indigenous plants.
Photo by Thomas Peschak 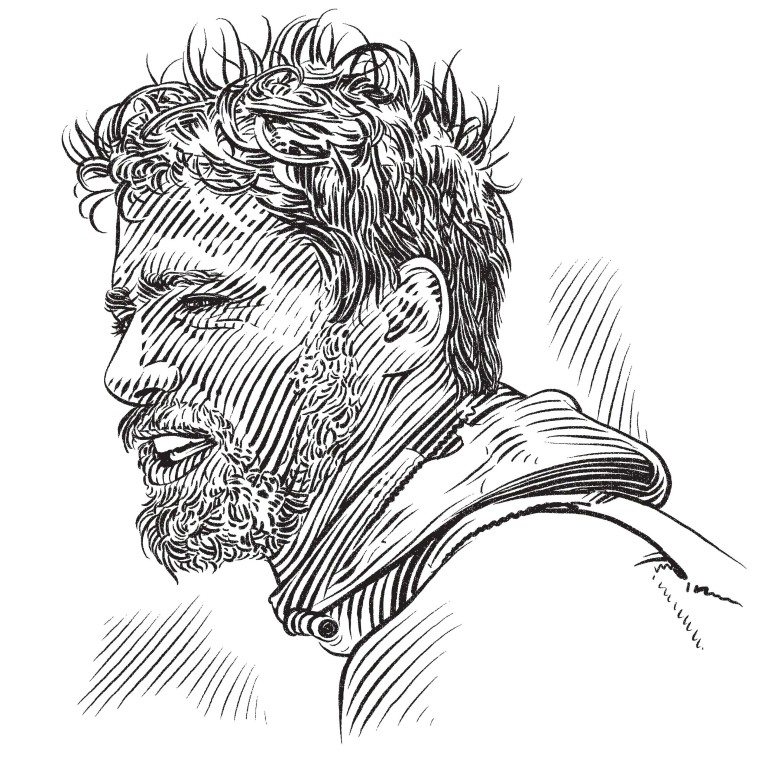 During the past two centuries, however, all the natural vegetation on D’Arros Island and St Joseph Atoll was cleared so that coconuts could be grown, guano collected and mangroves harvested. But by the 1970s it was no longer economically viable to produce coconuts on the Seychelles’ Outer Islands. The plantations were abandoned soon after D’Arros Island came under private ownership in 1975 and the coconut trees have subsequently taken over.

Native mixed broad-leaf forests can support a diverse community of species, including roosts and nesting areas for seabirds, habitat for indigenous forest bird species, and differing niches in which many insect, fungus and plant species are able to thrive. The alien coconut monoculture, on the other hand, cannot sustain as many species, and a less productive ecosystem is the result.

In 2003, a rat- and cat-eradication programme was completed successfully and the islands were once again able to provide safe nesting areas for many land and seabird species. The following year, the first attempts at stimulating native forest growth on the islands were begun. The original forest rehabilitation programme involved clearing coconut palms out of an area and planting indigenous tree species in the open space. The programme proved to be flawed, however, as the local forest trees did not grow well in full sunlight. Paradoxically, the conditions suited invasive pioneer shrubs and creepers, enabling them to thrive. It is only when the treetops meet and the forest canopy closes, forming a uniformly shaded environment, that the desired forest species will out-compete the invasive shrubs and creepers. It has been 10 years since the first forest space was cleared, but the indigenous trees are still far from closing the canopy because their growth was so severely stunted. This means that the cleared site requires prolonged and intensive maintenance to ensure that the forest can out-compete the pioneer species. 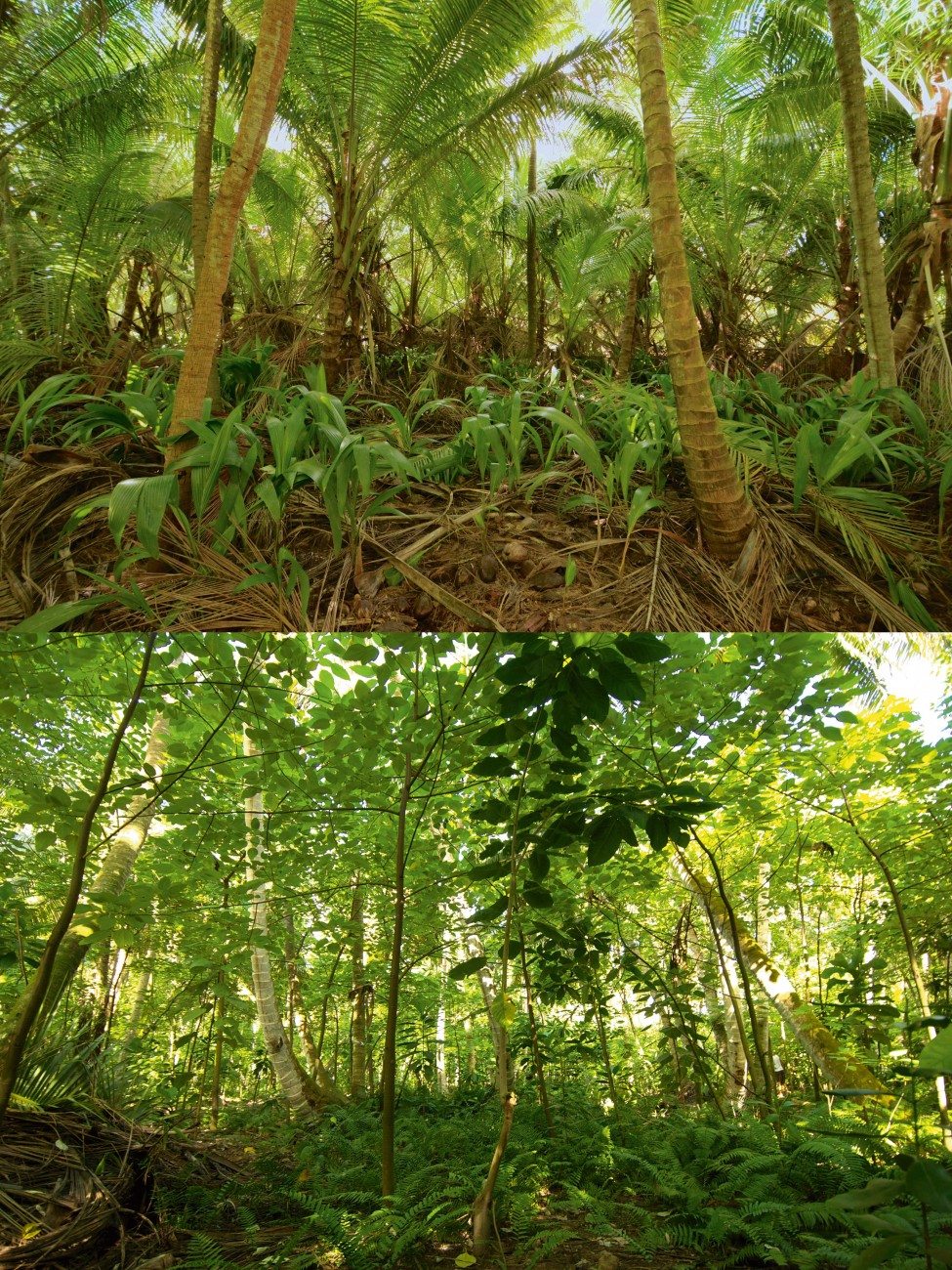 In 2010 Rainer von Brandis, the scientific director of the SOSF–DRC, realised that the forest rehabilitation programme wasn’t working and redesigned it. The current programme uses the established coconut palm canopy to provide the correct environment for the native forest trees to flourish in. To do this, the understorey of young coconut palms is uprooted and cleared to create space for the new forest trees. This eliminates competition for resources between the young palms and the indigenous trees. Any coconut palms that will not form part of the main canopy, because they are either too tall and protrude above it or too short and do not reach it, are cut down or poisoned. The rehabilitation will be regarded as a success only once no further maintenance is needed and the forest can be allowed to develop on its own into a healthy, stable ecosystem.

To keep the programme going, a selection of 10 broad-leaf tree species that grow naturally on the island have been propagated from seeds or seedlings in a small shade cloth-covered nursery, which has a capacity of about 1,400 trees and a turnaround time of 12 months. Fifteen of the 112 hectares of old coconut plantation on D’Arros Island are currently being planted with native trees. It has never been the long-term plan to rehabilitate the entire island, but rather to establish dominant forest patches that will, over time, out-compete the coconut plantation and spread across all viable land. In the coming years, the forest rehabilitation programme will be expanded across the channel to the islands of St Joseph Atoll.

Seeing a site change from a sterile monoculture to a diverse environment that has all the potential to develop into a healthy, self-sustaining ecosystem full of life is an extremely rewarding process. However, the true results of a forest rehabilitation programme such as this will only be seen after many years, in time for a new generation to appreciate its effects – both on land and in the surrounding ocean.

A biological field station based on D’Arros Island in the Amirantes Group, Seychelles, the SOSF D’Arros Research Centre (SOSF–DRC) conducts research on the pristine D’Arros Island and St Joseph Atoll and the waters around them. In recognition of the islands’ outstanding natural values, the research centre was established in 2004 and tasked with becoming a regional centre of excellence for marine and tropical island conservation. Initially, collaborations were established with local and international institutions and baseline ecological surveys were conducted in the various habitats. Over the ensuing years an increasing number of research projects and monitoring programmes were implemented in response to questions raised by the baseline surveys and by visiting scientists. More recently, the centre expanded its activities to include ecosystem restoration and environmental education.

Today the SOSF–DRC boasts the longest-running nesting turtle monitoring programme in the Amirantes and the most detailed and technically advanced coral reef monitoring programme in the Seychelles, making use of techniques such as stereo-video photogrammetry, photoquadrats, remote underwater video systems (BRUVs) and visual census. The research centre also maintains the largest acoustic receiver array in the Seychelles, which monitors the local movements of sharks, manta rays, stingrays, turtles and fish. Since its inception in 2004, the centre has initiated no fewer than 36 research projects in collaboration with more than 26 conservation institutions. The projects have resulted in 10 peer-reviewed scientific papers, one PhD and one MSc dissertation, five conference presentations and 27 scientific reports.