I grew up on the west coast of Canada and started free diving and spearfishing at a very young age. Pretty much everything that I loved involved the sea: surfing, free diving, spearfishing, sailing. My father taught me to free dive, and he also taught me to respect the sea. ‘If you’re going to spend time in the sea,’ he said, ‘it’s your responsibility to protect it.’

For more than 40 years I have been moved, impassioned and motivated by my love for the sea. Although I always tried to have a positive impact on the environment, as the years passed I started to notice big changes in the different ecosystems I was diving in. I felt I needed to do more to look after them – but what could I do?

In 2005 I chanced upon competitive free diving, taking part in a small competition and ending up qualifying for the world championships. Having achieved a top-10 finish in three out of four disciplines, I decided that I would apply myself and see what I could really do. By the end of 2006 I had gained a top-2 ranking in several disciplines and was the top-ranked male at the world championships. Now, I thought, sponsorship money will flow – how wrong I was!

As I continued to excel at competitive diving I realised that I might be able to leverage my free-diver status to make a difference. In 2008 the Malpelo Foundation in Colombia invited me to put my breath-hold diving skills to use by tagging sharks. It needed the information it could glean from tags to better protect the highly migratory scalloped hammerhead shark.

From there I started to look at how I could offer even more help. Since many research expeditions were being cancelled due to lack of funds – in some cases there was not even enough money to buy tags – my wife and I decided to look for funding. We finally found a foundation in Geneva, Switzerland, that was willing to provide finances on a small scale on condition that we set up a non-profit organisation. That is how the Watermen Project was created.

I have kept a high profile on the competitive free-diving scene because breaking records draws media attention and can thus be a useful tool. I found that I was able to leverage my title as holder of the world record for free-diving to shed light on the plight of sharks. This was particularly relevant when I was in Australia in December 2013, having been asked to promote the IMAX 3D film Great White Shark. Two fatal shark bites coincided with my trip and, needless to say, I had to answer many questions from journalists. Being a world-record holder opens doors, and I take the opportunity to educate the public and dispel common misconceptions about the unfortunately vilified predators that are sharks. 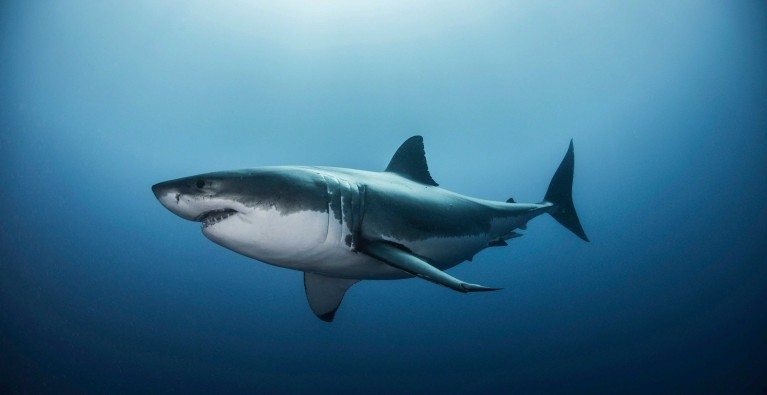