Behind the Scenes: Mac Stone index

Behind the Scenes: Mac Stone

South Africa became part of my geographic vocabulary when I was nine years old. My best friend’s dad, a supporter of Nelson Mandela, was smuggled out of the country in the bathroom of a cruise ship to escape persecution during apartheid. Many years later he moved to the US, raised a family and told stories about South Africa over curry dinners. What I remember most clearly was the fondness with which he still referred to his former home. He extolled a country that was full of extremes – beachside mansions and close-quartered townships, bustling cities and vast wildernesses, arid escarpments and temperate oceans – a place whose identity seemed indefinitely locked in a tug of war. I wanted nothing more than to visit.

As fate would have it, 20 years later I found myself in a gyrocopter humming over Cape Town. The towering facade of Table Mountain erupted out of a fog bank. It was primeval. But below, brief windows in the veil of fog revealed glimpses of busy streets and mazes of neighbourhoods, thickets of industry. The daily balancing act, or lack thereof in some cases, is what makes this place so dynamic, its story worth telling – and was the purpose of my being here. I would be documenting contrasting worlds, going back and forth between aquatic wilderness and urban shorelines, riding the intersecting lines of their coexistence.

The initial week of the assignment began with a series of firsts: my first time driving on the opposite side of the road; my first time diving in temperate water; my first time swimming with large sharks. Getting thrown into the deep end would be an apt description. Sure, I grazed a few curbs and soiled my wetsuit along the way, but I came to understand that the success of this assignment hinged on problem solving. When my pilot couldn’t fly because of strong winds, I hiked up to high ground. When I couldn’t dive because of choppy seas, I invested time in getting to know the trek-netting fishermen and the Shark Spotters. 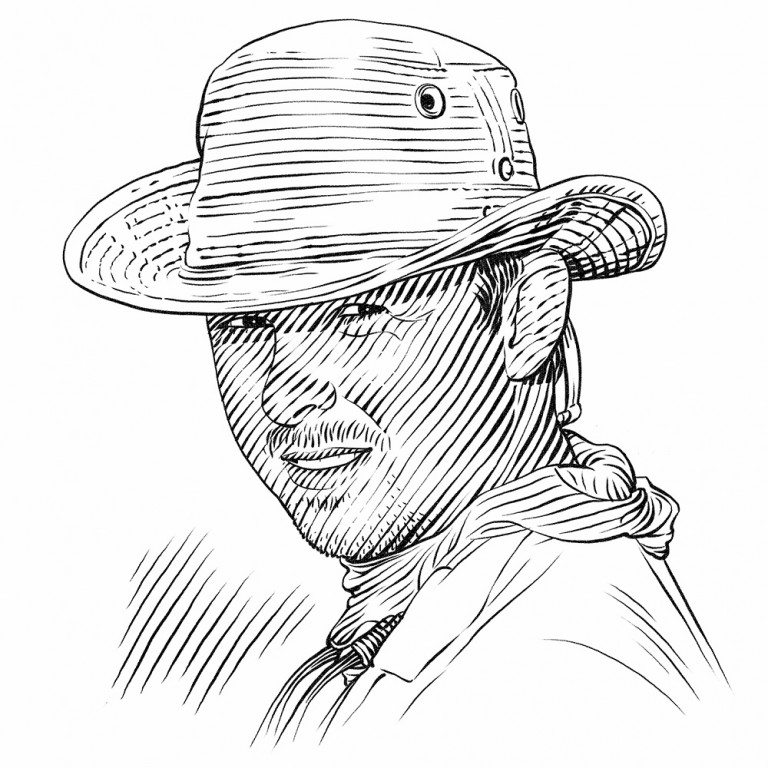 It’s no surprise, but the biggest obstacle during my month in South Africa was the weather. Every assignment photographer tells horror stories of ideal plans becoming laughable wishes. What was difficult to swallow, however, was that my ‘bad weather’ still looked like sunny San Diego. It was like a cruel joke. I needed crowded beaches, dramatic horizons and clear water. Instead I had ripping winds, textureless blue skies and False Bay’s version of pea soup.

On my first day in the bay, I set out to photograph sevengill cowsharks. The water was so turbid I couldn’t see more than a few metres. Shadows of a dozen massive sharks loomed in and out of towering, swaying kelp. When I got back to the boat after running out of air I was jacked up on adrenalin. It was incredible photographing in that cold, foreign environment. I leaned over to high-five my assistant who had been to that site a dozen times and she confessed, ‘That was the most terrifying dive I’ve ever been on.’ Fortunately for me, there is a priceless privilege to being an outsider looking in. I had no baseline for what was normal and could form my own opinions along the way. I jumped back in 15 minutes later. 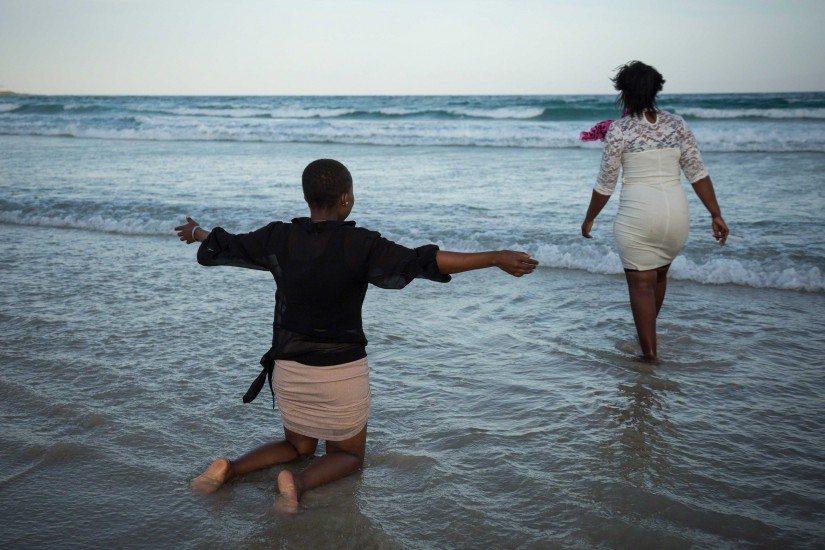 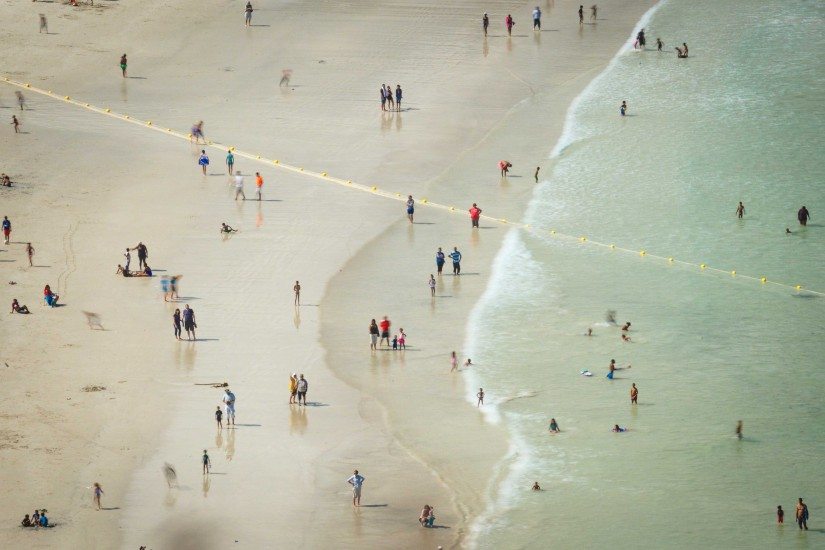 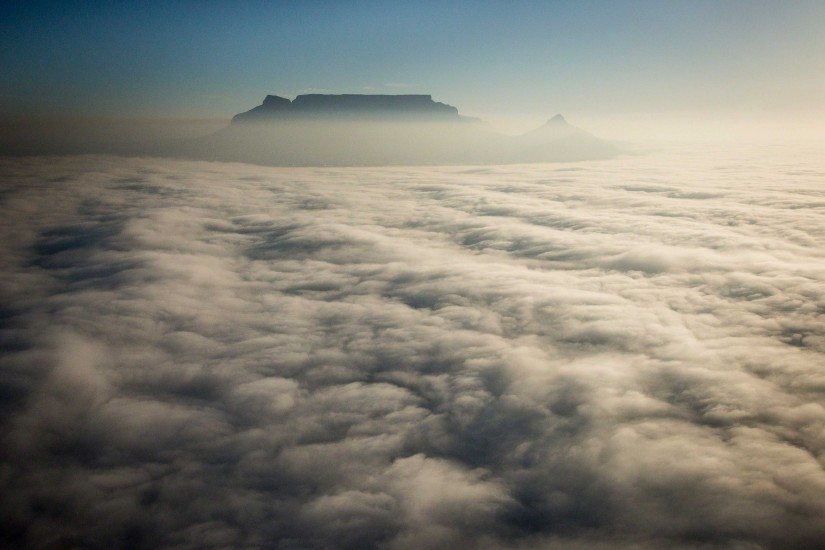 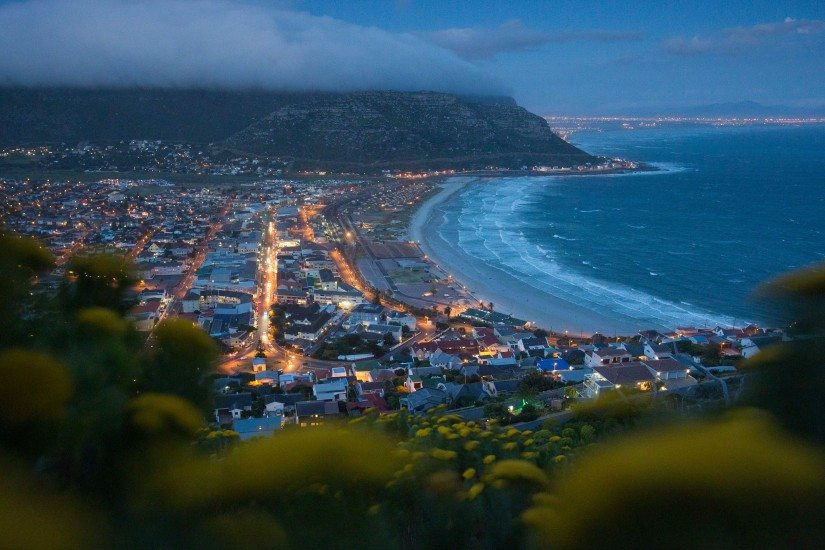 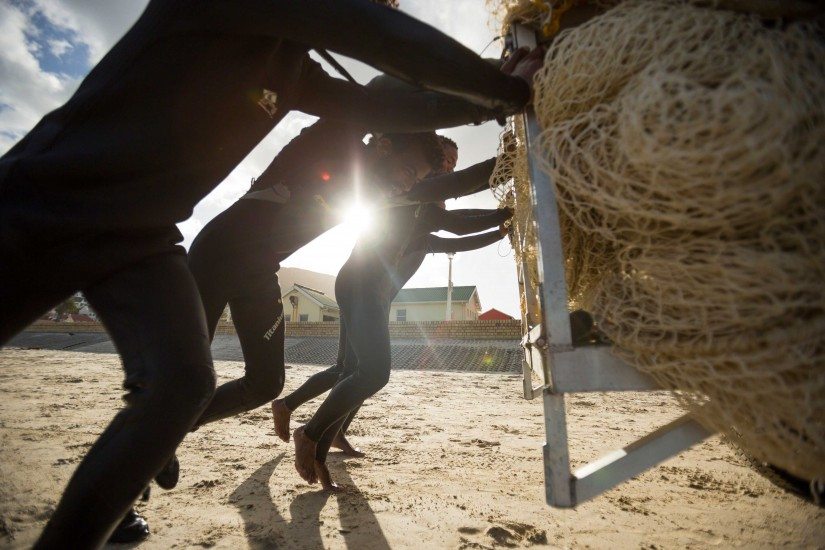 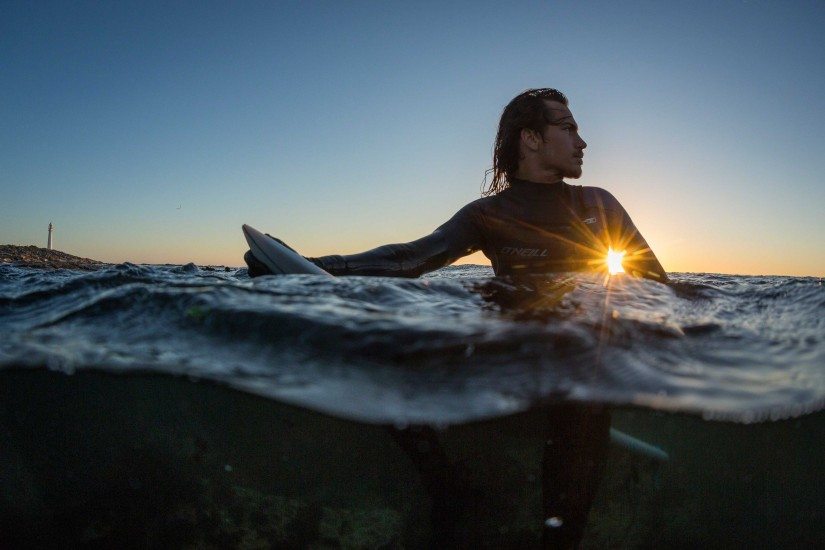 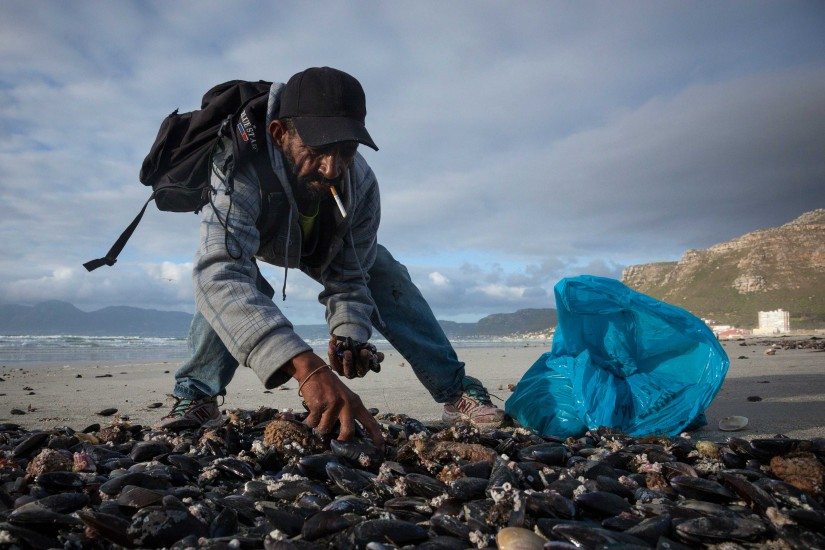 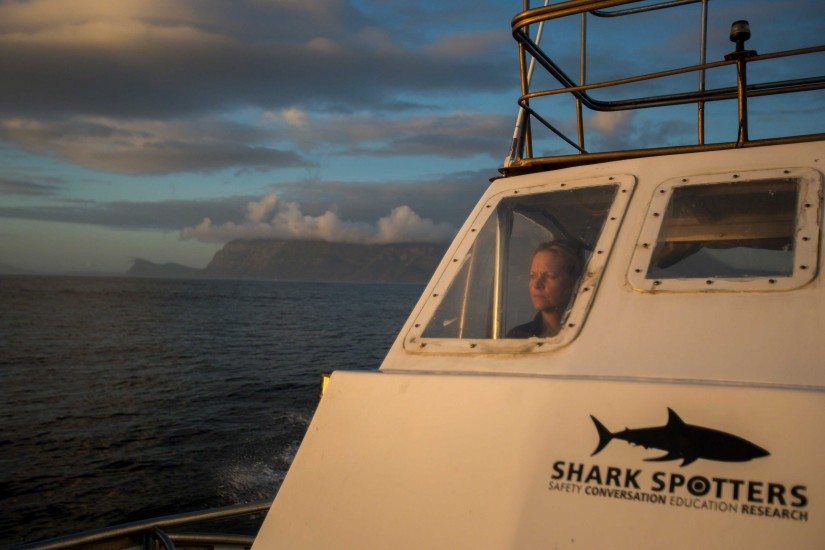 Over the course of the assignment I stayed glued to Wind Guru, a forecasting app that became my omniscient overlord. You have to be careful what you wish for, though, because when the winds let up, the real stress started. In favourable conditions, I had 20 things that needed to be photographed. By the second week, time management was critical to capturing images and I had to capitalise on every opportunity knowing that the next dive or flight could be my last.

Regardless of weather, I established something of a routine. The typical day consisted of waking up before dawn and trolling the popular beaches for bold swimmers and good light. I would wade into the water and interrupt their peaceful communion to take a few photos. By 9 am I was in the car, wet and sandy, and heading out to Muizenberg or further down the coast to see if the trek-netters were working. By mid-afternoon I was in Fish Hoek swimming with beach-goers until it was time for the Shark Spotters to bring in the exclusion net. Then, at last light, I’d see who was left to try and get a few last frames before nightfall. Rinse and repeat.

What were we looking for? 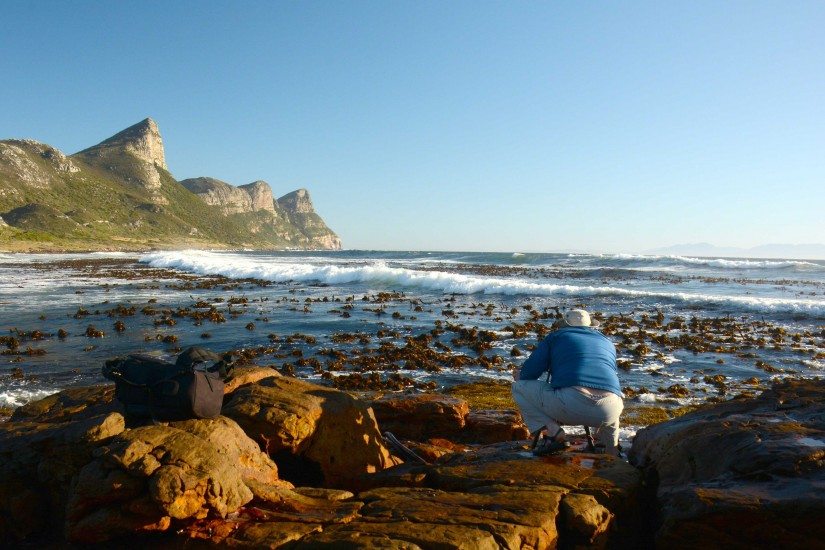 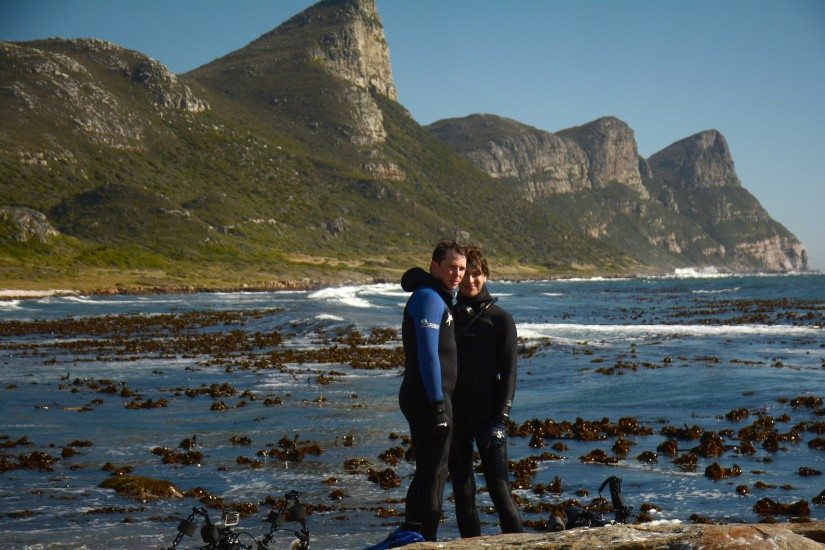 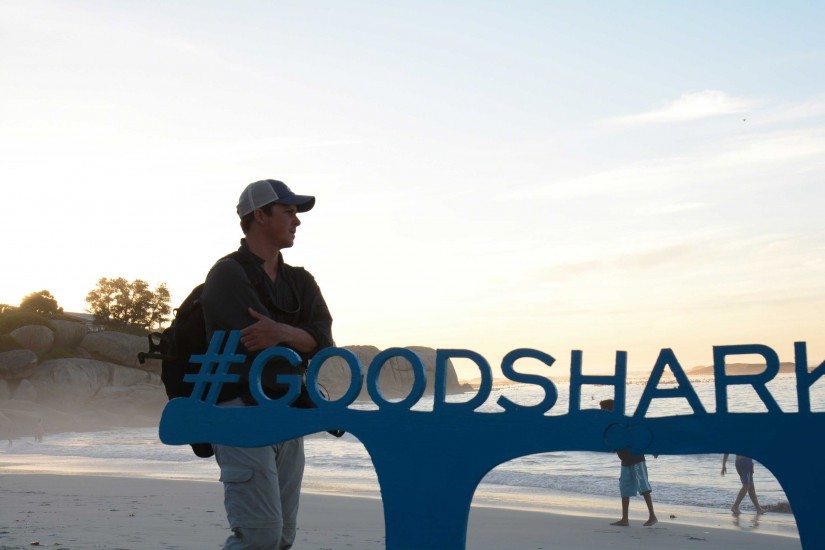 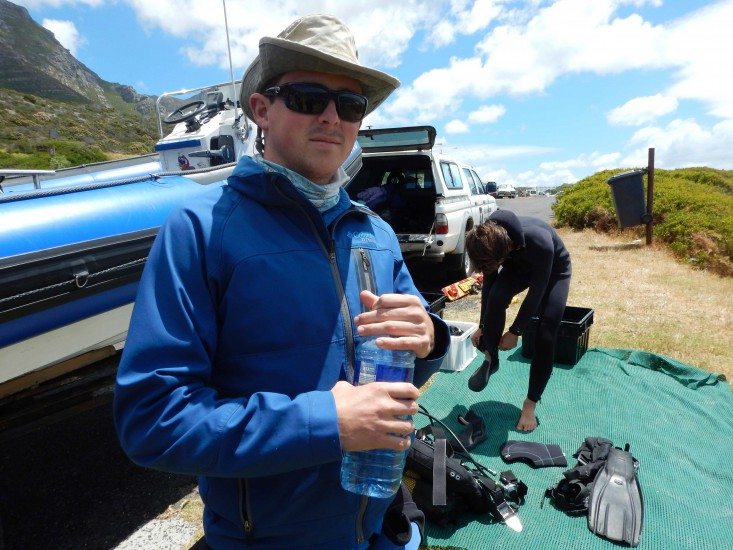 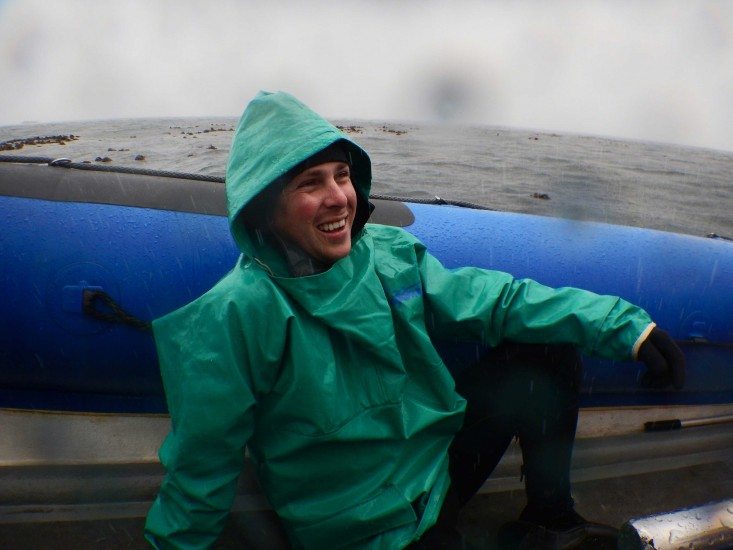 More often than not, there were no sharks in the seine nets, no exclusion net to remove and I would come home empty-handed. It killed me to have a day go by without taking a publishable photo. What counted, though, was that I constantly showed up. The Shark Spotters all knew my name and the fishermen could recognise me walking down the beach a kilometre away. When photographing a human component, trust is ultimately what makes the discomfort and awkwardness of the camera disappear. So when the trek-netters finally pulled a bronze whaler on shore, they elbowed out the spectators and made sure I had a front-row seat. It was the image I had been waiting weeks to get, showing the stewardship of the seine-net crew as they safely return a writhing shark to sea.

Looking back on it now, I wish I could say that it was silly how much I stressed about this story. Every day was a grind of constantly questioning if I was making the right decisions. I lost many hours of sleep and several meals worrying about how the visual narrative would unfold or if it would be good enough. Not just because it was my reputation on the line, but also because I felt a debt was owed. What the Save Our Seas Foundation is accomplishing in False Bay on behalf of marine conservation is truly remarkable. It has helped transform a feared predator into dozens of jobs, educating its citizens that marine wilderness and urban life can coexist. Perhaps the measure of a society is not in its lack of dichotomies, but in the gracefulness with which it balances them.

The Save Our Seas Foundation believes that photography is a powerful tool for marine conservation. We invite emerging conservation and wildlife photographers who have a passion for marine subjects to apply for our 2016 grant. This is a unique opportunity for photographers to go on assignment, earn an income and gain experience under the guidance of National Geographic photographer Thomas Peschak.