Enthusiasm for sharks and interest in their biology transcend international boundaries and cultures, as Cassandra Ruck discovers when she welcomes Igbal Elhassan to the Shark Research Center in Florida.

The day was Friday, 9 January 2015. After battling traffic for an hour, finding the correct parking garage and navigating to the terminal, it was time to find a place to ‘chill out’. If you’ve ever driven in Miami on the infamously crowded I-95 freeway, you will understand that this is quite a feat for a native New Englander who had never been to Miami International Airport. Thankfully, I had a great co-pilot in Cristín Fitzpatrick, my lab mate at the SOSF Shark Research Center. We found a restaurant not too far from the terminal and plopped down at the bar. I sat there munching on chips and guacamole while awaiting the arrival of a woman, Igbal Elhassan, whom I had only met via e-mail. All I knew was that Igbal was from Sudan, was pursuing her PhD, had sampled thousands of sharks from the Arabian and Red seas in dozens of remote fishing villages, and was visiting the USA for the first time. She had been described to me as ‘a remarkable woman’.

Finally, after a few flight delays and three hours at Chili’s, Cristín and I were able to greet our new colleague. Igbal walked into the terminal with a huge smile and hugged us warmly. We located her belongings, which had arrived on an earlier flight without her, and ultimately made it back to her home away from home: Hollywood, Florida.

On Monday we got straight to work. With an MSc in fisheries, Igbal found herself in the completely new territory of conservation genetics. Like the spirited woman she is, she came to her new scientific environment with perseverance, enthusiasm and a keen interest to learn genetics lab and statistical methods. Our goal in this collaboration was to provide her with the experience and training that would enable her not only to pursue her PhD, but also to return home with knowledge she could pass on to students in her home institution, the University of Bahri in Sudan. Heavy sanctions limit the resources of Sudanese scientists and it is vital for them to travel internationally to gain skills and knowledge that they can bring home and share.

In order to give Igbal a fully immersive experience, the SOSF Shark Research Center team of Dr Andrea Bernard, Cristín, Reggie Williams, Megan Earney and myself got started on the samples Igbal had painstakingly collected from fishery landing sites and began working on projects to train her in genetics and contribute to her PhD. We chose to conduct a population genetics study on the spinner shark Carcharhinus brevipinna. An important coastal species with a global distribution, the spinner shark is a target of both recreational and commercial fisheries. It takes its name from a peculiar behaviour: bursting from the water and spinning in the air one, two, even three times before falling back with a splash. The spinner shark closely resembles the blacktip shark Carcharhinus limbatus, the main visible difference being a black spot on the anal fin that the spinner has and the blacktip lacks. It’s a small difference and the two species are often confused – spinner meat is often sold as blacktip meat – but thankfully genetics can always tell the difference, even if only from body parts! 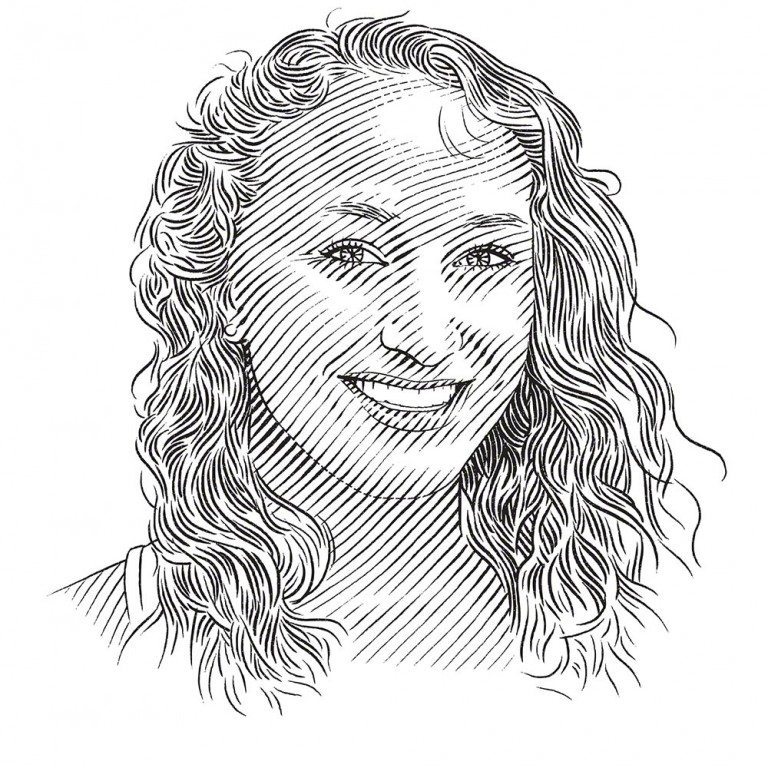 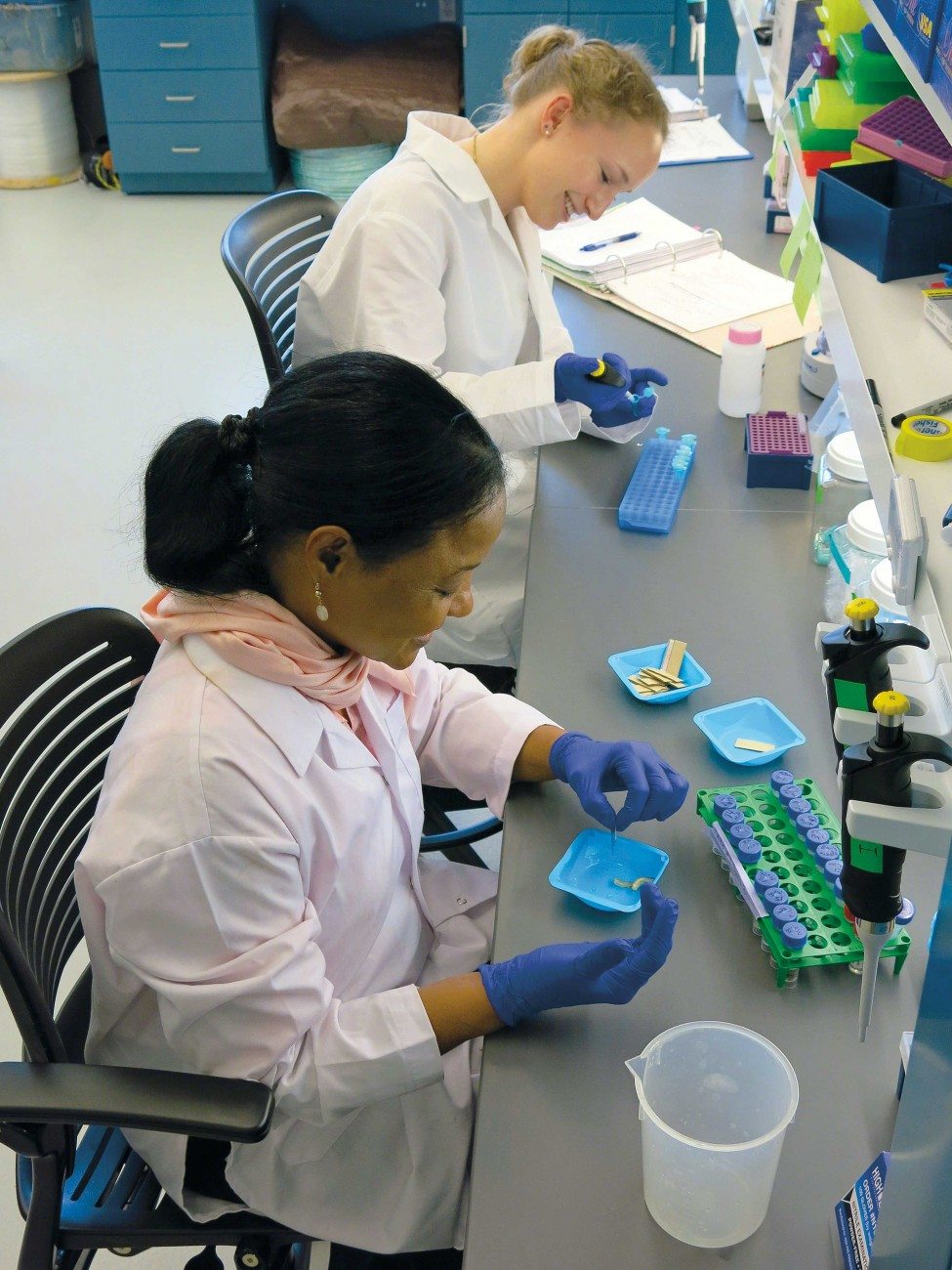 International collaboration, such as this between researchers in the United States and Sudan, provides an opportunity to share ideas, knowledge and culture.
Photo by Christine Fitzpatrick

Because of this easily mistaken identity, spinner shark catches are presumed to be vastly under-reported. Based on data currently available, the spinner shark is classified as Near Threatened on the IUCN Red List of Threatened SpeciesTM. It is also a commercially important and heavily fished species, so it is imperative that we determine its population structure and genetic health.

As many Florida residents are aware, spinner sharks are migrants: every March, thousands of them, together with blacktip sharks, swim north up the coast of Florida. But we don’t know where they go or how far they travel. If spinner sharks undertake long migrations, it is possible that different populations may be genetically linked across broad geographic areas. Unfortunately, though, very little genetic assessment of spinner sharks has been done. In terms of population structure, only one scientific study has been published: in 2013 Pascal Geraghty and his colleagues investigated the genetic structure and demographic history of spinner sharks in the Southern Indo-Pacific Ocean. The results of the study suggest that there are at least two genetically distinct populations of spinner sharks that should be managed accordingly – one in Australian and one in South African waters.

Cue the SOSF-SRC and Igbal Elhassan. By combining new genetic analyses – of samples Igbal collected from fisheries in the Red Sea and Gulf of Aden and samples obtained by the SOSSRC from the Western Atlantic – with the published genetic data from the Southern Indo-Pacific Ocean spinners collected by Geraghty and his team, we are working to provide a global view of spinner shark population structure and dynamics. Are the spinner sharks in the Gulf of Mexico part of the same population of spinner sharks that migrate off the coast of Florida? Are the spinner sharks in South Africa somehow connected with those in the Red Sea? How does the genetic diversity of Atlantic spinners compare to that of spinners in the Middle East and Southern Indo-Pacific? These are all questions we aim to answer with this collaborative study.

International teamwork such as this provides an opportunity to share not only samples, but also ideas, knowledge and culture. Working together is critical if we are to expand the reach of shark conservation worldwide. It is especially gratifying that by the end of her visit here, Igbal will be adding the powerful tools of conservation genetics to her already impressive expertise in shark fisheries and taxonomy – and transferring these skills to her students in Sudan. Hosting Igbal has been an invaluable experience for the SOSSRC team and we look forward to long-term collaboration with her after she returns home.

International collaboration, such as this between researchers in the United States and Sudan, provides an opportunity to share ideas, knowledge and culture.
Photo by Christine Fitzpatrick
Project