A feeling for turtles index

A feeling for turtles

On a Saturday afternoon in early November 2004, house painter Jean-Claude Camille made his way to the D’Arros Research Centre to embark on a walk that changed his life. Activities surrounding the arrival of a particular woman on the island included an after-work meeting. The woman, a researcher who had visited D’Arros many times before, was looking for Seychellois volunteers to participate in a study of the sea turtles that nest on the beaches of D’Arros Island and St Joseph Atoll. She had already enlisted one worker, Mike Botsoie, and she hoped on this trip to find at least one more. A call had gone out the day before that there would be a training session at 4 pm on the Saturday. Jean-Claude and three other men showed up, drawn by the promise of rewarding recreational activity on their quiet and remote island home.

The woman was Dr Jeanne Mortimer and she was in the process of establishing community-based monitoring of nesting hawksbill and green turtles as one of the programmes of the newly constructed D’Arros Research Centre. The premise was nothing new to Jeanne. Back then, she had been studying turtles in the Seychelles for nearly 24 years and had set up long-term turtle-monitoring programmes at many locations around the country. But the D’Arros programme would be different from the others. To begin with, it would be the first to be set up in the Amirantes group of islands in the Seychelles. More importantly, the staff of this programme would consist not of professional or conventional conservation workers, but of Seychellois labourers interested in collecting data about the turtles and doing so outside their normal working hours. That Saturday afternoon, Jeanne was not optimistic about the crew that showed up for training.

‘At that time,’ Jean-Claude told me, ‘every weekend we were supposed to have our drink.’ Recalling perhaps more carefree days and still finding humour in the fact that Jeanne thought the volunteers would show up sober, he continued, ‘But we couldn’t stay without our drink when Jeanne took us on a walk that Saturday.’ He let out a deep, rolling laugh. ‘And that day was a lot of fun on the beach!’

Clearly none of the aspiring crew had heeded the call for sobriety. But Jeanne was, and still is, an exceptionally dedicated researcher. Optimistic and open-minded, she embraced the challenge – and the fun – and led the stumbling men around the island, training them how to measure tracks, tag turtles and record data.

‘I wasn’t interested in turtles,’ explained Jean-Claude. ‘Not then, before Jeanne came. Nobody was working on the turtles. Some people were even killing them. For me that was a bad idea, the killing.’ Yet his interest was sparked on that first walk with Jeanne. Although she had to leave the island the next day, Jean-Claude continued the walks, and his training, with Mike Botsoie until she returned two months later.

Jeanne’s progressive approach to turtle monitoring has paid off. Today, the community-based turtle-monitoring programme on D’Arros is the longest-running such initiative in the Amirantes. Even more remarkably, it is the only one of its kind that consists entirely of Seychellois workers, who join the team with no previous conservation experience.

‘It was obvious almost from day one that Jean-Claude developed an attraction for the turtles,’ recalled Jeanne. ‘During those early months both Mike and Jean-Claude were working on a volunteer basis, without pay.’ 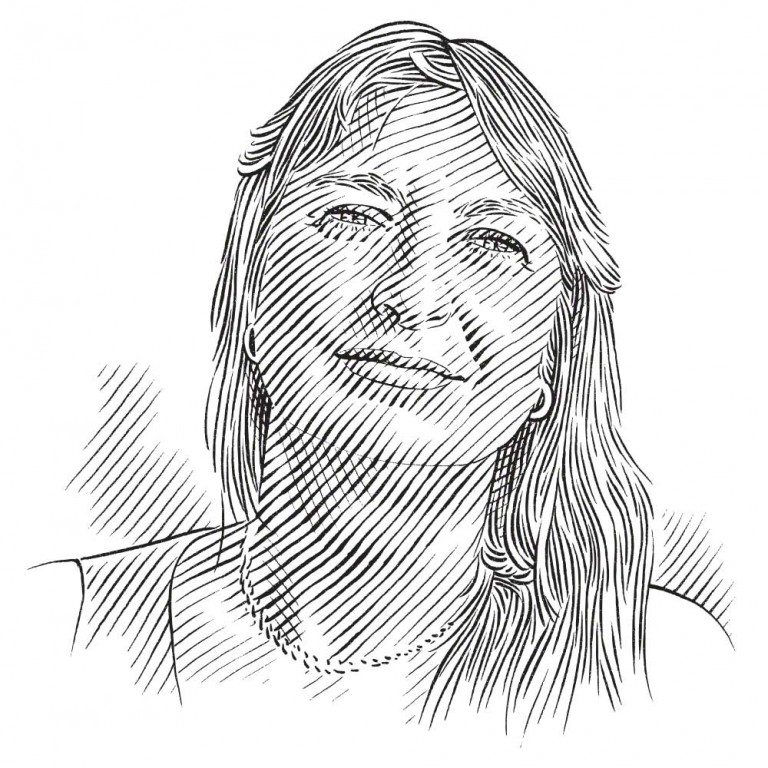 Clare Keating Daly Lab Manager
Jean-Claude Camille
A lot of people in the Seychelles are interested in conservation. Me? I never collected data before starting with the turtles. Before we started people were eating turtles, but because of our work they stopped and now they also want to protect them. Share it
Jean-Claude Camille and Jeanne Mortimer
Photo by Olivier Born

In January this year I travelled to meet Jean-Claude on Aride Island, where he now works as a conservation ranger for the Island Conservation Society. His love for turtles was palpable in the way his posture straightened and his normally steady voice became sharply staccato when he talked about protecting turtles from poachers. When he described tagging and monitoring turtles, his voice smoothed again and his intent stare settled on me, making sure I understood the significance of his work. I asked him about the seabirds and rare endemic birds of Aride Island whose calls were punctuating our conversation, but he waved the topic off, gesturing, but not actually saying, that the birds were a waste of his time; he needed to be with the turtles. ‘When the feeling comes, the interest comes, you forget about the money. It’s not for the money,’ he told me.

Back in 2004, Jean-Claude also knew from that first day that he wanted to work more with Jeanne and the turtles. But to monitor turtles full time, to go from house painter to conservation ranger, would require commitment and some lifestyle changes. ‘After that first day,’ remembered Jean-Claude, ‘afterwards I said, I want to take the job seriously. I have to stop drinking, take things seriously, learn to drive the boat.’

And he did all of that. In 2011, after collecting data on D’Arros Island for seven years, Jean-Claude co-authored with Jeanne a paper titled ‘Seasonality and status of nesting hawksbill and green turtles on D’Arros Island, Amirantes Group, Seychelles’, which was published in the journal Chelonian Conservation and Biology. Previously, in 2010, he had been the co-author of a poster presented at the 30th Annual International Symposium on Sea Turtle Biology and Conservation.

‘Lots of Seychellois have an aptitude for this kind of work,’ Jeanne told me. ‘But they may not have liked school when they were young, and never received formal training.’

One of Jeanne’s challenges when setting up community turtle monitoring has been to find people in the Seychelles who perhaps doubt their ability to collect scientific data or contribute to conservation, but show an appreciation for nature. ‘I try to understand their perspective and then interact and work with them in a manner that will make them feel confident that they can in fact do this sort of work and make an important contribution,’ she said. ‘And I tell them that in the process they can do interesting things and also have a lot of fun.’

The longevity of the community turtle-monitoring programme on D’Arros and its success in significantly reducing the number of poaching incidents, along with the life-long commitment to conservation of past monitors like Jean-Claude, suggest that Jeanne’s approach is a good one.

‘A lot of people in the Seychelles are interested in conservation,’ Jean-Claude said. ‘Me? I never collected data before starting with the turtles. Before we started people were eating turtles, but because of our work they stopped and now they also want to protect them.’
Jean-Claude’s journey, from D’Arros to Aride, from house painter to conservation ranger, is an important reminder that – perhaps above all else – it is passion that drives conservation of the natural world. At D’Arros Research Centre, Jean-Claude was presented with the chance to learn a skill, to uncover a passion and, ultimately, to change his life and that of countless turtles.

Jeanne’s approach to working with people in a manner that makes them feel comfortable and her recognition of passion when she sees it are integral to the success of the community-based turtle-monitoring programme. The dedication and interest of Seychellois workers on D’Arros over the years have contributed significantly to turtle research and conservation. The following Seychellois are recognised for their service as community turtle monitors in the years from 2004 to 2016:

A biological field station based on D’Arros Island in the Amirantes Group, Seychelles, the SOSF D’Arros Research Centre (SOSF–DRC) conducts research on the pristine D’Arros Island and St Joseph Atoll and the waters around them. In recognition of the islands’ outstanding natural values, the research centre was established in 2004 and tasked with becoming a regional centre of excellence for marine and tropical island conservation. Initially, collaborations were established with local and international institutions and baseline ecological surveys were conducted in the various habitats. Over the ensuing years an increasing number of research projects and monitoring programmes were implemented in response to questions raised by the baseline surveys and by visiting scientists. More recently, the centre expanded its activities to include ecosystem restoration and environmental education.

Today the SOSF–DRC boasts the longest-running nesting turtle monitoring programme in the Amirantes and the most detailed and technically advanced coral reef monitoring programme in the Seychelles, making use of techniques such as stereo-video photogrammetry, photoquadrats, remote underwater video systems (BRUVs) and visual census. The research centre also maintains the largest acoustic receiver array in the Seychelles, which monitors the local movements of sharks, manta rays, stingrays, turtles and fish. Since its inception in 2004, the centre has initiated no fewer than 36 research projects in collaboration with more than 26 conservation institutions. The projects have resulted in 10 peer-reviewed scientific papers, one PhD and one MSc dissertation, five conference presentations and 27 scientific reports.